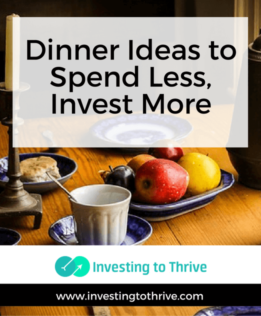 A major expense for most households is food. The U.S. Department of Agriculture reports that families of four (with young children) might spend as little as $568.40 or as much as $1,112.70 monthly on food at home, depending on whether they are thrifty or liberal in their spending. Those who are short on dinner ideas may eat out more and spend more on food.

A friend recently told me that she spends about $1,200 monthly to feed two grown adults and five teens and young twentysomethings at home. I also spend a lot when my sons are home visiting.

I’ve found that it takes creative, sustained effort to spend less (time and money) on meals. As my life changes, with kids entering and leaving the house, I’m constantly experimenting with ways to eat better and spend less. Here are dinner ideas that have worked for me:

I’m going to start with the super-easy ways to put dinner on the table. Meals in this category may not be as pristinely healthy as I’d like but they work well for a busy family. I’m suggesting them as a way to kickstart eating at home and begin the process of saving money on a food bill.

Somewhere in town, there’s likely an entrepreneur or small business that sells entrees, side dishes, and desserts made in small batches just like (or close to) homemade meals. I sometimes buy items freshly made or available frozen and requiring simple reheating.

This caterer or catering company may have a traditional storefront or may operate a commercial kitchen at home and make deliveries. So it makes sense to ask around to find prepared meals that fit my preferences and budget.

Many cities have quick-serve restaurants with good food at competitive prices. Meals may include protein, vegetables, and starch (usually rice or noodles). When my kids were younger, they loved Chinese food and even ate the veggies that accompanied these meals.

Prepared foods from the grocery store

Similar to catered dishes, prepared meals are often available at my local grocery store. These may include salads like chicken salad or broccoli salad; side dishes like twice-baked potatoes; and fully cooked entrees such as rotisserie chicken. Quality and cost can vary. But the convenience section of the local grocer can be a good choice compared to fast food or a pricey dinner out.

Frozen food from the grocery store

There are some decent choices in the frozen food aisle of the grocery store, especially Trader Joe’s. These include easy-to-prepare all-natural pizzas, microwaveable pasta, and veggies (along with lasagnas that I occasionally served my kids when they were growing up).

Quick-serve restaurants may not always deliver the healthiest foods but I can often get a good meal without consuming loads of fat, sodium, and processed ingredients. Chains like Panera Bread offer reasonably healthy meals at prices well below fine dining establishments.

Though I may spend a bit more on these meals, I’ll save on utility costs associated with preparing meals and cleaning up pots and pans.

According to my instructor at a community college class on cooking, most people eat the same dishes over and over. They rotate their favorites every week or so. For variety, they periodically add new meals to the rotation and take out well-used ones that are no longer interesting.

Among the meals on my rotation are some really simple dinner ideas. They’re the ones I choose when I need a fast, easy-to-make dinner at home:

Toss boneless, skinless chicken breasts in a baking pan and drizzle with olive oil, lemon juice, and herbs. Cook on 450 degrees until done (about thirty to forty minutes). At the same time, roast vegetables such as cauliflower, kale, or sweet potato fries in the same oven until done.

Place noodles in boiling water, remove from heat and cover with a lid. Noodles should be cooked in about 30 minutes.

Brown some hamburger meat (or pull out meat from the freezer that’s previously been cooked) and/or saute vegetables like green peppers, onions, and mushrooms. To these ingredients, add prepared spaghetti sauce (generally store-bought but occasionally homemade), heat, and then simmer until cooked thoroughly. Serve sauce over noodles and sprinkle with your favorite cheese.

For an omelet, saute vegetables (peppers, onions, spinach, mushrooms, etc.) in oil or butter in a frying pan, then add eggs and cheese until done. For a quiche, prepare a pastry shell; add cheese, cooked vegetables, eggs, and a dash of milk or cream; cook at 350 degrees until done.

Place a beef roast in a crockpot (I like eye-of-round roasts) along with vegetables like mushrooms and carrots, dried onion soup mix, and cream of mushroom soup (make your own or buy an organic version) and cook for several hours on low until done but not too dry.

Fix some brown rice to go along with the roast for a nice meal with little effort.

I may use these simple go-to recipes, ask friends for theirs, or, as tastes and preferences change, develop more dinner ideas that are quick and easy. At first, I considered the idea that most people eat the same things over and over a little depressing, but then I found comfort in knowing that I didn’t have to constantly try out new recipes in order to be a proper cook, save money, and eat well.

Dinner Ideas Delivered to Your Door

I recently had the opportunity to try a meal delivery service as I relished the chance to limit grocery shopping soon after having minor surgery.

Recipes and ingredients were delivered fresh to my home and carefully packaged and labeled indicating their assigned meals. For example, a small brown bag contained demiglace, spices, cheeses, and nuts for a specific meal.

What I loved about this set-up was having dinner planned for me, ingredients purchased and shipped to my door, and detailed instructions laid out. I learned new cooking techniques, discovered new ingredients (I had never used demiglace before, for example), and added new meals to my repertoire including ones that I would have never thought would be delicious based on their descriptions.

What I didn’t like about the program was the expense (about $10 per person for each meal), lack of leftovers for my lunches, and the time intensity of the recipes. Prepping the food usually took twenty or thirty minutes, not the ten minutes typically indicated on the recipe cards. Cooking time was generally accurate though nearly every moment was consumed with stirring, mixing, and prepping the next element of the meal. I had to actively cook these meals, not toss them in the slow cooker and forget about them until dinnertime or simmer for an hour while relaxing or handling another chore.

Using a meal delivery service can be helpful. It might also be worthwhile to avoid grocery shopping as long as I don’t mind spending about $10 per person on dinner, three nights per week. If I’ve been eating out a lot lately, I can save money.

Meal Plans and Dinner Ideas Delivered to My Inbox

I’ve read about meal planning services in which I pay a small monthly fee and receive recipes and grocery shopping lists. When my kids were younger, we had set meals that they loved (usually!) and I didn’t want to spend money or effort trying a new system.

But now that both kids are out of the house, I have more flexibility with my meal planning and have been interested in trying something new. The Blue Apron experiment was fun. But I don’t have the time or inclination to cook special meals every night.

Still, I want healthy meals, especially as I train for RAGBRAI, a weeklong cycling event across Iowa and a half-ironman. I’ve begun trying recipes from No Meat Athlete by Matt Frazier and The Daniel Plan Cookbook by Rick Warren, Dr. Daniel Amen, and Dr. Mark Hyman (both available on Kindle). Recipes are available at the No Meat Athlete website and The Daniel Plan Recipe Pinterest Board.

I’ve also tested and enjoyed meals that I can prep, freeze,  and cook easily on another date. I can make the dinners fresh but I can also toss ingredients in a container and freeze them for cooking later.

I’m just as interested in saving time as controlling my food budget. Saving money can mean more money to invest. Extra time can mean investing more in my family and friends, my pursuing my hobbies (mainly cycling, running, and for this year, triathlon), and expanding my creative works.

How do you save time and money on meals?