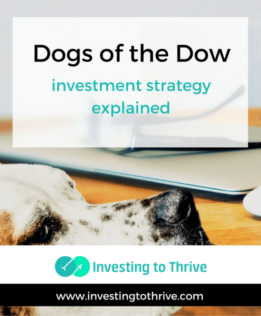 Investors are often involved in a quest to beat the market. That is, they want to make investment decisions that deliver performance results better than a passive investing strategy, such as one involving the purchase of market-index funds.

The Dogs of the Dow represents an investing strategy developed with the goal of outperforming the Dow, a market index. It involves using a simple formula to identify the top 10 undervalued stocks among the Dow holdings, which consist of 30 blue-chip stocks. There are also modifications of this strategy, also designed in hopes of outperforming the market.

This strategy may perform well in some years and not as well in others. Still, I’d like to explore the rationale for this investing or trading technique.

First, what is the Dow? The Dow refers to the Dow Jones Industrial Average, which represents 30 of the largest publicly-held companies in the United States. Currently, these 30 corporations are:

The “industrial” average is designed to contain companies representing all U.S. industries with the exception of transportation and utilities.

Periodically, the list of companies is updated. For example, Apple was added in 2015, replacing AT&T; in 2013, Goldman Sachs, Visa, and Nike replaced Hewlett Packard, Alcoa, and Bank of America.

The value of the DJIA aka The Dow is based on the share prices of its components. This price-weighting measure differs from the S&P 500’s market-capitalization measurement method (with market capitalization representing share prices multiplied by outstanding shares).

Dogs of the Dow

The “Dogs of the Dow” represent the top 10 highest dividend-yielding companies (the dogs) in the Dow or Dow Jones Industrial Average. Calculate dividend yield by taking the annual dividend of a stock and dividing this amount by its current share price.

I have struggled to understand the meaning attached to “dogs” in this investing scenario. The term “dog” often carries a negative connotation, but it may reference a positive attribute.

I have come to believe that dogginess refers to hard-working creatures that are likely undervalued. That is, the dogs offer high dividend yields, indicating that a) they generate benefits (aka dividends or income) simply through share ownership and b) they could be undervalued as their yields reflect not only dividends but also a relatively low share price.

Note that the “dogs” formula is simplistic for stock-picking purposes. However, if I’m interested primarily in dividends then I may enjoy paying a lower-than-average price for this form of income.

Typically, the Dogs of the Dow change each year as dividend yields change. Also, there are variations of this theme. For example, there is also the Dow 5, representing the lowest priced shares.

To invest using the Dogs of the Dow strategy, I’d purchase shares of the 10 companies identified through the screening process (that is, the 10 highest dividend-yielding companies of the Dow Jones Industrial Average at the end of the previous year). My trade would involve buying an equal dollar amount of shares in each company.

In subsequent years, as the companies that are “dogs” change, I’d sell the old dogs and buy the current ones. Plus, I would make changes to keep the portfolio equally balanced among the 10 companies that represent the Dogs of the Dow.

From a tax perspective, I may want to hold shares for more than one year to avoid short-term capital gains taxes on holdings in regular taxable accounts.

Note that I could implement this strategy in a number of ways. I could buy individual stocks or a Dogs ETF, for example.

I’ve never invested using the Dogs of the Dow strategy. But I’ve enjoyed learning more about this strategy as it’s helped me to better understand dividend yields, which may be useful when building an income-producing portfolio.

Do you invest in the Dow or Dogs of the Dow?

2 responses to “Dogs of the Dow, Investing Strategy Explained”