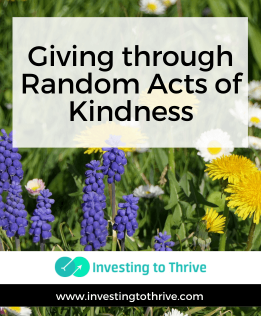 Disclosure: This article may contain affiliate links, which generate income for this free website at no cost to you. This article is written for informational purposes only and should not be construed as financial or any other type of professional advice.

One of my intentions this year has been to reach people in need. I’ve been giving charitably for a while but I also want to make a more direct, more visible impact in the community but in a fun, friendly, and spontaneous way. So instead of evaluating charity ratings (a worthwhile endeavor but not my intent for this activity), I have been pursuing opportunities to meet needs through random acts of kindness.

I’ve been doing a few random things but got excited when I heard of the Random Acts of Kindness challenge led by Sarah Wilson aka Budget Girl through the FinCon community, a group of people engaged in personal-finance media who want to improve financial literacy and well-being for their fans and the world.

There are a few schools of thought about what random acts of kindness means. According to Wikipedia. a random act of kindness is defined by the following attributes:

The Random Acts of Kindness website broadens the idea of kindness and allows you to include yourself and the earth in your kindness agenda. Examples of simple kindnesses include letting someone else merge ahead of you in traffic, paying for a stranger’s meal, bringing reusable bags to the grocery store, and sending a hand-written note of appreciation to a friend.

My take on being kind in a seemingly random way is defined by these attributes:

Just thinking about being randomly kind requires some thought for me and deviation from my usual in-depth analysis of a situation and desire to optimize the impact of generosity. That is, I’ve learned to override my overthinking in favor of action. I can be thoughtful in charitable giving yet whimsical in offering gifts to friends and strangers. Thankfully, the two are not mutually exclusive.

Kindness as a Reflex

An interesting model of both intention and spontaneity is the Air Force Cycling Team (AFCT). I became aware of this group when a cycling friend crashed his bike while participating in RAGBRAI (an annual bike ride across Iowa). The roads were packed with cyclists (over 10,000 each day!) so not only was it dangerous to be laying on the side of the road after an accident, it was also difficult to receive medical assistance due to congestion.

The AFCT, however, anticipates such situations. Team members prepare for this event throughout the year and, then, during the week of the ride, position themselves on the route. In this way, they can react when needs arise. Moments after my friend’s accident, team members began redirecting traffic around the injured cyclist and nearby broken pavement and treating him for injuries (the team included nurse practitioners) while waiting for an ambulance to arrive.

I’ve realized then that I can act randomly and respond to opportunities in the moment by being prepared, physically, emotionally, financially, and time-wise.

As a byproduct of my readiness, I’ve had the honor to do the following:

What I’ve found to be effective is to turn general ideas of being kind into specific actions, right now. So instead of contemplating a gift to the food bank (also a good idea but not what I have in mind here), I’m on the lookout for ways to help and spring to action as quickly as possible.

Intentional Yet Spontaneous Acts of Kindness

For Sarah Wilson’s Random Acts of Kindness challenge, I wanted to find a project that anyone could do, without connections or collaborations with friends.

Food and Cash Ready to be Given

My first idea was to pack a box of food, water, and cash ($5 bills) to give to people who situate themselves on busy intersections and request food or money via handwritten lettering on cardboard signs. What I discovered, though, is that folks often stand in areas that make it difficult for me to pass along a gift. My plan was to give a goody bag by rolling down my window on the driver’s side whereas nearly everyone I encountered as a potential receiver stood on the passenger’s side. 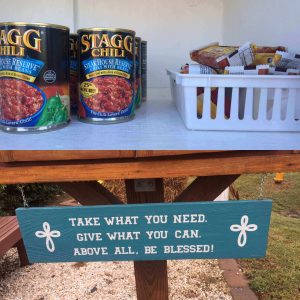 So, I decided to focus my attention on the Blessing Box in a far corner of my church’s parking lot, near the sidewalk. The Blessing Box is similar to a Little Free Library in design and placement, except the box is meant mainly for grocery items rather than books. Another major difference is that items for a blessing box can typically be used once only whereas books can be shared again and again. Both, though, are easily accessible and allow you to give and receive.

Just putting stuff in the box was good but I wanted to make this process interesting. So, I decided to test the popularity of various items, starting with what I would want in a blessing from the grocery store. I also talked with the mom of the scout who installed the box to get ideas.

Here are my findings:

In short, put in what you’d like for yourself or what you’ve noticed other people like. Further, it’s fine to delight box users.

The cost for box supplies can vary depending on the items and the frequency of replenishment. You could spend as little as a few dollars each month or as much as $50 per month; what’s interesting about this random act is that you can be as random as you like in spending and still spread joy.

What about you? How do you show random acts of kindness?

One response to “Giving through Random Acts of Kindness”