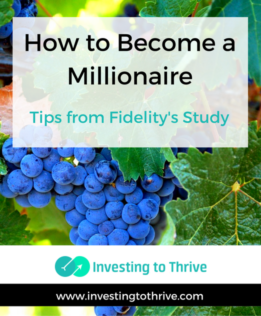 You don’t have to inherit a trust fund or run a business empire to become a millionaire. According to the 2014 Fidelity Millionaire Outlook Study, specific money-related behaviors can enable you to accumulate significant wealth, counted in the millions of dollars by the time you retire.

The firm commissioned surveys of investors and advisors to identify steps to increasing wealth, which included drawing on investing-related habits of the emerging affluent (with $250,000 of investable and retirement assets at an average age of 40), mass affluent ($800,000 in assets), millionaires, and deca-millionaires ($10 million or more in net worth).

Here are takeaways on how to become a millionaire:

Investing over a long time horizon is key to accumulating wealth. Sure, making millions (or billions) on an IPO as a business founder or investor sounds much more exciting and compelling than slowly building assets. But many people gradually grow their wealth over 30 or 40 years.

Though real life tends not to deliver predictable returns, steady growth often occurs over long periods of time. So, the earlier you start investing and the longer you stay invested, the more likely you can build a 7-figure investment portfolio. Notably, the wealthy represented in this survey focused on long-term investing.

Get (and keep) a good-paying job

Those earning $125,000 annually tend to have a good opportunity to become wealthy. Though you could certainly save and invest on a lower income (particularly those who live in low-cost regions), having a relatively large income most likely improves the chances of accumulating a million dollars by retirement or earlier.

For some folks, this income may be reachable while for others not so much without significant changes career-wise. However, this news should be encouraging to many people. Contrary to what seems to be ever-growing popular belief, you don’t have to construct a business empire before you are 30 years old or arrange your birth to royalty in order to become wealthy.

Both the emerging affluent and the deca-millionaires show the capacity to “invest aggressively to help maximize returns, as well as a willingness to set aside a significant portion of their portfolio for riskier investments.”

I’ll speculate about this finding in terms of cause and effect. Like me, you might reasonably conclude that folks become wealthy because they are willing to take risks. But I’ll note that as investors accumulate greater wealth, they gain greater capacity to take risks because they have greater “disposable” assets (not earmarked for essentials).

The wealthy often seek guidance and validation from financial advisors. And, deca-millionaires tend to consult more than one advisor. Forty-eight percent of the emerging affluent use an advisor whereas 70-71% of millionaires (and more) use these services.

According to the study, wealthy investors tend to favor individual domestic stocks and are more diversified than others. Over half of the millionaires held investments in the following:

The broad diversification is intriguing because I often get the impression that successful investors tend to focus on just one type of investment, and either uses an advisor or manage their own investments. This study suggests the wide use of various approaches. Note that the experience of those who responded to this survey “may not be representative of all investors and doesn’t predict future success. ”

The big lesson for me from this survey and companion pieces at Fidelity’s site: investing aggressively and constantly working to improve investing prowess may enable an investor to become a millionaire or multimillionaire.

Do any of these findings surprise you?