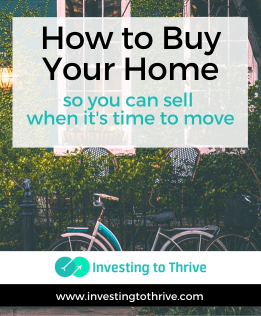 I felt anxious when I learned that my former coworkers were distraught over being unable to sell their houses.

The small town where I had settled seemed affordable enough, especially after I became established in my job and finally began earning more than I was spending. The place wasn’t my first choice but I found a decent job there, working as a financial analyst at the corporate headquarters of a regional bank.

When we heard the announcement about the bank’s acquisition we were worried about our jobs, which would most certainly be considered redundant in the combined organization. Within weeks, though, we learned that the bigger bank planned to hire most of us in some capacity. The catch was that the positions would be located in a city that was nearly two hours away. That meant we’d face long commutes or we’d need to move.

Still, we felt relieved. My coworkers and I could pay our bills, just from a new location with a different employer.

But, as people started the moving process, they faced a new reality. A massive number of people were moving away and very few were moving to the area. The housing market collapsed overnight.

As for me, I happened to be renting a house and didn’t face the cost of paying for two places to live as I waited for one to sell. But the fear and frustration of those who were trying to sell their homes was disturbing. The home-buying lesson: it makes sense to consider whether you can sell your house quickly and profitably even before you buy it, particularly if the home comprises a large part of your overall net worth.

I approached buying a home carefully after this experience. Being numbers oriented helped me, at least in regard to buying what would sell quickly. We sold our first house in less than 48 hours and the second one within 30 days, despite a government shutdown and its affect on our buyer.

Here are the home attributes I considered before buying:

I looked for homes in established neighborhoods where houses tended to sell quickly (within a few months) close to asking prices. I wanted a place that moved homes but wasn’t considered transient. Generally, even in small towns, there are a few of these neighborhoods.

Beyond this measure of both stable residents and steady turnover, any type of neighborhood would work for me. However, I did want to avoid what I perceived as extremes. That is, I wouldn’t consider high-end developments that only a few could afford. Further, I dismissed an in-progress development as I wasn’t sure of its future (during one of my searches, a small neighborhood with a home I’d considered was later abandoned by its developer).

One neighborhood I visited was nice but its location in a small town kept me away. People who moved to the general area tended to congregate in the suburbs of a large city. Since few moved to this smaller town, I didn’t take the risk of buying there despite its higher quality of living.

I looked for a traditional design that fit well within the neighborhood. The homes I considered would never win design awards; they’d fit nicely and unassumingly with their neighbors.

I rejected homes that seemed quirky (like this house which sold for half its asking price after being on the market for a few years ). I didn’t hesitate to pass on a beautiful house if it seemed out of the ordinary as I figured that these houses appealed to a limited number of people. And it seemed unlikely that these folks would surface as potential home buyers just at the moment I wanted to sell my house.

In hindsight, I can see that my choices were somewhat boring. But at the time, I wasn’t looking for excitement or personal expression in home design. I was looking for a house that would sell quickly – the more people in the pool of potential buyers, the better.

Still, the locations I’ve sought weren’t necessarily the most popular among current residents. I focused on areas that were desirable in terms of proximity to grocery stores, restaurants, schools, and parks. Plus, I didn’t compromise on home design or pricing just because of the location.

I wanted a home priced fairly and affordably. Whether a home is priced fairly can be subjective and changing so I focused first on buying a home with mortgage payments that wouldn’t stretch me financially.

At first, any home price and mortgage payment sounded outrageous. But after I paid off my car loan, this amount, combined with the rent my husband and I had been paying on a much smaller house, made mortgage payments doable. We had money left over for spending, saving, and investing in other areas. So, if we needed to take a loss on the sale of the home, this situation wouldn’t devastate us financially.

At this time, I wasn’t anticipating home upkeep. But eventually, I realized that buying a home with a reasonable mortgage payment amount (or none at all) meant that we could afford to maintain the home, like replace the heating system or get a new roof when needed. Further, a financial setback, like a change in employment (at lower pay), would be unlikely to compel us to sell the house quickly. So, not only would affordability allow us to save in other areas, it also gave us more cushion in the event of changes in our finances.

Of course, I didn’t want to pay too much even if this amount was affordable to me. One way to get pricing right is to hire a smart, trustworthy real estate professional who offers sound, unpressured advice. The other way is to learn how to do my own analyses, made easier when homes in the neighborhood are sold and bought on a regular basis.

At the time, Zillow and its competitors didn’t exist. But public records and listing of real estate sales did. Whether you’re using an algorithm, appraiser, or agent (or all three), the process of evaluating a home price involves looking at home sales in the area and then adding or subtracting value based on differences among properties. For example, more heated square footage adds more value. A carport is worth less than a garage.

The idea isn’t to compare what you’d like or prefer but to consider how the market would price an upgrade. That is, one house may have a great basement but that is generally not valued high simply because it’s not considered the main part of the house. To a certain extent, buyers may not offer more for a home with a basement but they might be more eager to make a strong offer on a house with a finished basement.

The biggest danger in pricing based on market activity: if people are paying too much for homes in the area, then you may be convinced to do the same based on your calculations. Comparing prices to other markets, while not a perfect or precise solution, can give you an idea about whether a certain market and house is overpriced.

For my first two homes, I excelled in buying homes that sold quickly. (We’ve yet to put our third house on the market.) Still, you may have different priorities in a home. Plus, the longer you live in a home, the more things may change in terms of the location attractiveness and home appeal. Styles and traffic patterns change, after all. Anticipating these may have been useful for me.

Here are a few things I wish I had noticed more before:

As much as I prided myself in getting the price right for the houses we purchased, I realize now that I didn’t have a grasp on the cost of upkeep and upgrades. A home inspection can show you what needs to be fixed but the cost of repairs may be much higher than you first imagined. Building codes may change from the time the house was built to when you make a major repair or upgrade, driving up the cost. Or you might uncover a shortcut in the original construction that requires an expensive fix only after renovations are started.

When evaluating a house and its pricing, consider the costs of upgrading the home carefully.

In an effort to stay away from quirky homes and designs with limited appeal, I stuck with a traditional home for suburban-type communities. At the time, I wasn’t looking for excitement or personal expression in home design. I was looking for a house that would sell quickly. A mass appeal meant more people in the pool of potential buyers, which was always better for me.

Now I’d consider a more creative design, especially if it meant better use of outdoor space or greater energy efficiency.

What I’ve learned is that some locations are popular (and pricier) in enduring ways as the surrounding area remains stable over decades. Other areas may change and become more or less in demand. So it makes sense to consider what development might look like and how it may change your home value.

I’ve also discovered that newer developments can be better for home buyers. Homes are newer also and may require less maintenance, particularly in the early years. Further, what’s new today may become established and stable within a decade. An established neighborhood may become dated and undesirable during this same time period. You can’t always tell what a development and its surrounding area might look like later.

I’ve tried to choose a home in a neighborhood and area I’d that’s endearing to me. But I’ll admit that I’ve chosen easy-to-sell over quality of life. In one situation, we bought in a suburb rather than a nearby small town partly because I figured it would be easier to sell the house. This decision worked in our favor when we needed to sell quickly because of a work-related move. Faced with this situation again, though, I may have opted for the small town and its better quality of life.

As we’ve been able to save and invest, our house is now a small part of our net worth. So, I’m concerned but not anxious about spending money on my next home.

What did you consider when you bought your first home?