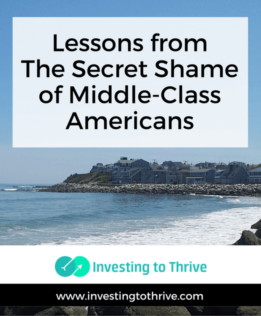 Making the rounds in my social media sphere this week is The Secret Shame of Middle-Class Americans, an article by Neal Gabler published in The Atlantic. The provocative subtitle reveals the shameful secret: “Nearly half of Americans would have trouble finding $400 to pay for an emergency. I’m one of them.”

The nearly penniless (or at least $400-less) writer is a smart, well-educated, published author who shouldn’t have found himself in such a predicament.

In Facebook groups and magazine articles like How Not to Make It and All the Sad, Broke, Literary Men, Secret Shame has stirred up controversy and conversations about what the middle class should reasonably afford, and whether Gabler represents the middle class.

As a baby boomer like Gabler, I understand his perspective. In our adult lives, we’ve experienced double-digit interest and unemployment rates, housing market collapses, and career crises. I can identify with many of Gabler’s frustrations and the series of decisions that resulted in him having no money to his name — except presumably, his house in the Hamptons that’s likely worth at least a million dollars. (The home doesn’t have the liquidity of money in a savings account so, despite the possibility that Gabler has a substantial net worth, he doesn’t have the cash to handle a minor emergency.)

While aspects of his dilemma resonate with me, my results have been better in terms of personal economics. I’ve got cash on hand, have money in my retirement accounts, and didn’t have to ask my parents to pay college bills for my kids, their grandchildren. If you’re wondering how to avoid being broke as your near retirement despite being well paid most of your working life, here are lessons to glean from this story:

But as I mentioned in my article on reasons to put money in a savings account, the benefit of ready cash has nothing to do with investment returns. Having cash on hand means that you can handle small emergencies and take advantage of buying opportunities, perhaps getting a great cash price for a large purchase or buying stocks when they’re on sale.

If you want to have the cash to handle a $400 emergency, then you’ll need to keep cash on hand.

As a writer, often self-employed, Gabler received his income in uneven streams, much like a cyclical business. At certain times in his career, he’d work for months with little money coming in, then get a huge paycheck once every few years when a book was published. As result, it was difficult (I imagine) to follow general rules of thumb like saving 10% of your income each month.

Saving when self-employed is a challenge, especially if you adopt a lifestyle based on peak earnings.

Consider developing a system for spending and saving that meshes with an irregular flow of money into your bank account. To accomplish this goal, you might project your income on a monthly basis and spend based on your lowest-income month. You might allocate your money for the current month based on earnings from the previous month. Find a method that works for you.

There’s a mention of an economic concept called consumption smoothing in the article, an idea considered reasonable by economists that involves “offsetting bad years with good ones—borrowing in the bad, saving in the good.” It’s possible Gabler believed his income would not only catch up with his spending but more than make up for moments (in his case, years) of financial indiscretion.

As a younger boomer, this economic idea seems unfeasible to me. By the time I graduated from college, management training opportunities and job offers extended to new graduates had largely disappeared. Instead, I entered the workforce during a recession with double-digit unemployment rates, which was followed by a series of jobs with employers that were acquired and then dismantled via leveraged buyouts. As a result, I never believed that I would always have a job or experience increasing income.

Still, let’s consider the idea more seriously because your income and/or spending could be uneven over a given period of time (for example, one year or 10 years) but even out over your lifetime.

As an illustration, let’s say you earn $50,000 today as a 22-year-old and expect 4% pay increases every year so that by the end of a 43-year career, you’ll make $270,000. Rather than create a lifestyle that fits entry-level earnings, you’ll live based on your (expected) average earnings. If you could, you might buy a home worth $500,000 starting out based on your income mid-point in your career. You’d expect your salary to eventually cover the mortgage payment plus give you money to save for retirement.

If you have a guaranteed income and predictable expenses, this arrangement could allow you to spend in lean times and save during prosperous ones. But the reasons that this approach might not work are plentiful: you lose your job; you don’t receive steady pay increases; you or a family member has a serious illness; you take a vacation rather than contribute to your retirement account; you buy a boat when you receive a raise instead of paying off debt.

Kids can bankrupt you

Children can be expensive. You need to buy them food and clothes, and you may pay for extras like summer camp and cell phones.

Furthermore, the success of our children seems to be the measure of our success as a parent, and spending to get that success seems to be a component and a potential pitfall of helping them (therefore, us) to become accomplished. Costs can mount and bank accounts drained when parents foot the bill for education and experiences, like private school, study abroad, etc.

Despite my financial resolve, I’ve found it difficult to say no to a reasonable request from my children, especially when I have the money to cover an expense. Still, I think I could refuse to fund an experience if doing so required borrowing money, asking my parents for money (Gabler got his parents to pay for his daughter’s college education in part, thus spending his inheritance), or robbing a retirement account (Gabler cashed out a small 401(k) to pay for a daughter’s wedding). I rarely say I’d never do something but I hope I wouldn’t take those steps.

The longer I am a parent, the more I realize that the sooner you teach your kids to curb their spending and become financially self-sufficient, the better for everyone. Kids can be expensive, don’t let them rob you of your wealth.

Gabler mentions that he seemed to encounter unexpected money-grabbing crises at every turn. I’ve had the same feeling. As my house and cars got older and my kids turned into teenagers, extra spending that at first seemed to be an exception (a big school trip here, a heating system that needed to be replaced there) turned out to be the general rule.

Eventually, he realized that crises appear on a regular basis, even if the nature of the crisis changes. Because of their regular onslaught, he proposes that “the primary reason many of us can’t save for a rainy day is that we live in an ongoing storm.”

To avoid being in a constant storm, consider 1) saving and investing aggressively when you are young and not burdened with family and housing expenses; 2) establishing fixed costs well below your means and then some (that is, buy the affordable house, not the stretch one).

Gabler shouldered the family’s financial problems on his own, even to the point where he told his wife that they were fine when she asked. There have been many times that I’ve struggled with a difficulty, only to find a quick remedy when I shared my concerns with a friend or family member.

I’ll admit that in some cases bringing up a problem seemed to make things worse, at least temporarily. But the only way I’ve managed to get to a resolution in many delicate situations is to start the discussion sooner rather than later. Family members are often more understanding and cooperative when they know about a problem.

As I mentioned in my article on smart and not-so-smart money moves, the impact of your smart decisions can outweigh the damage done by the stupid ones. But it’s difficult to overcome a series of mistakes made over a span of 40 years or so. You can’t upgrade your lifestyle while you reduce your income, ignore the costs of paying two mortgages without taking action, etc. and expect things to work out nicely. At some point, you’ve got to start making wiser moves.

Hopefully, by acknowledging his failings, Gabler will recover and even prosper, perhaps after his upcoming books are published. As for me, it’s been helpful to ignore the standard of living that’s considered middle class and instead pursue an affordable version of the American Dream.

How have you avoided the secret shame of the middle class?