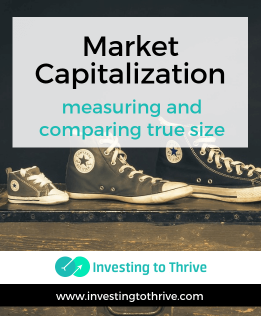 Disclosure: This article is written for informational purposes only and should not be construed as financial or any other type of professional advice.

One of the first things I do when I analyze an individual stock is locate the current price and the number of shares. Eventually, I use the numbers (and more that I gather) to determine what I believe is a reasonable price to pay for the stock.

But one of the first calculations that I make is the market capitalization. The formula is the Current Price x the Number of Outstanding Shares.

There’s a lot embedded in this simple calculation.

When I first started listening to financial news, I heard about small-cap companies. These were the exciting ones. They held great potential for growth. They might change the way people worked, for example, and make their shareholders wealthy. Conversely, they might prove that innovative ideas while intriguing rarely yield amazing results and wreck the performance of shareholders’ portfolios.

But what exactly is a small cap company? Or a micro-cap, mid-cap, large-cap, or mega-cap one?

There are differing opinions on this subject, which I learned while experimenting with stock screening tools. Brokerage firms and industry experts hold differing views on what size constitutes a small cap and whether something called a mega-cap even exists. But rather than quibble about millions of dollars, here is a general guideline for various levels of market capitalization:

This information may be useful when consuming financial media. You’ll know what’s meant by capitalization (sometimes also called valuation), so you can focus on the finer points of the discussion if so desired.

Usefulness of the Market Capitalization

Market capitalization generally represents the size of a company. But there are exceptions to this general rule. Knowing when these exceptions work may save you money.

As I mentioned earlier, market capitalization is the result of the share price multiplied by the number of outstanding shares. As a company grows and becomes more valuable, its stock price may increase, which in turn may increase its market-cap status.

But sometimes, a company’s stock price increases for no good underlying business reason. People get excited about a company, buy its stock like crazy, drive up the price, and increase its market cap out of line with its size in terms of sales and profits.

Valuations associated with IPOs (initial public offerings) are the poster children of my point. Pinterest skipped the small-cap line and moved directly into mid-cap status with a valuation of $12 billion. According to statements published by Fidelity, the company lost $63 million in 2018 on annual revenue of $756 million. Fellow IPO-er Lyft is also unprofitable and valued at $17 billion (at this writing).

Meanwhile, profitable companies with similar sales volumes are valued less by the marketplace. Companies that are comparable in market-cap size include:

It’s possible that Pinterest and Lyft could remain highly valued, turn a profit, and grow into their current valuations. That is, even if they’re not worth over $10 billion today, they could be in the future.

High valuations on unprofitable companies are not a new phenomenon. But still, it makes sense to take notice of the market value. As a consumer, I wouldn’t pay more for a midsize car than a downtown condo (I’d rather live in the condo, not the car); similarly, as an investor, I want to buy a company that generates cash, not one that burns through it.

So, when you’re evaluating a publicly-held company and determining whether you’ll buy its shares, consider whether you think the desired company is worth as much as similarly valued ones. This quick look at the market cap can reveal much.

Do you look at market capitalization when evaluating a company?