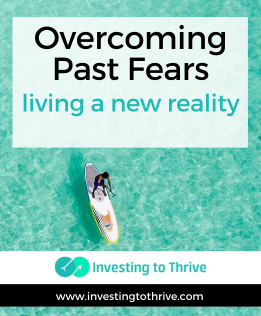 Disclosure: This article is written for informational purposes only and should not be construed as financial or any other type of professional advice.

Getting ready to descend a winding road, I focus on holding my cyclist’s line and pray that no potholes, dead possums, or energetic dogs make sudden, unexpected appearances. I’ve learned to manage the anxiety, leaning into the fear enough to encourage myself to pump the brakes but keeping distance enough from my trepidation to travel safely.

Some fears dissipate while others linger

I took up road cycling in midlife. Eventually, I became accustomed to cars and trucks passing me on the road, sometimes complying with laws regarding safe passing distances and sometimes not. But my fears around two things persist. They are twisting roads with steep or unknown changes in elevation and dogs that intercept cyclists on the road.

I study the statistics that my friends share on Strava, social media for athletes. I feel uneasy at the 49-mph maximum noted in the nearby mountains. My top speed is 37 mph on a simple down-and-up road, no twists or turns.

So when I encounter what looks like a curve-laden descent, including ones I traveled in my early days of road cycling, worry washes over me. In anticipation of what’s ahead, I move to the back of the group with which I’m riding or I remind myself to ride predictably so others can pass safely — as they inevitably do.

One segment in particular provoked distress. Not only did it involve what I remembered as a suddenly steep, winding descent but dogs chasing me before the dip in the road. During one outing, broken pavement caused me to move unexpectedly. Fortunately, road signs warned of possible but unspecified danger and others avoided me.

In my mind, still, the road carried a permanent label of scary and unsafe.

Eventually, the DOT closed the road for repairs. My cycling friends and I developed alternate routes.

Still, danger lurked behind the roadblocks and detour signs, certain to resurface after the repairs were completed and the road reopened.

Past fears seem daunting, until they don’t influence you anymore

The road did open and the day came for me to navigate again this stretch of downhill, curves, and dogs. Anxiety arose within me. As my friends sped ahead and I took the hills as they came, I realized this challenge was not as daunting as I had been imagining.

Such a revelation has happened more than once. The fear embedded in my memory seems so true and right, but when I confront reality, it’s not nearly as scary. The road isn’t as winding as I remembered. The steepness is not as stark as I recalled. As I’ve become more familiar with road cycling in general and specific stretches of roads in particular, I’ve been able to replace those fearsome memories with more confident ones. It’s not that I shouldn’t have been scared in the first place; it’s just that I need to remember how far I’ve come and learned to deal with challenges.

I realize that some of my fears around money and investing are the same as my trepidation around cycling. Certain aspects give me no trouble. But others evoke fear and remind me that I’m falling short of what I hoped to accomplish.

Systemic inequality may lead to fear and confusion

Worry of being perpetually underpaid and unappreciated comes to mind. My first employer paid female workers less than our male counterparts. I learned of the wage inequality later in life.

But I was well aware of the grumbling from the salaried manager and the volunteer board when I asked to be paid for hours spent as a swim coach at a community pool. Sure, the work wasn’t all that difficult, especially for someone like me who spent summers swimming competitively and earning lifeguard and swim instruction certifications. Waiting with the kids during the swim meets and making sure they were safe, accounted for, and ready to go at the right time came second nature.

Still, I took the job seriously, even if the people who paid me didn’t. I recruited a 10-year-old girl to the pool’s team after seeing her swim backstroke. My encouragement helped her to regain confidence lost after failing a series of swim lessons administered by my coworker. In turn, she contributed to our team by winning her event in all of our competitions.

And, it was an easy decision to argue for the inclusion of a six-year-old boy as the second alternative on the 6 & Under freestyle relay. Sure, he was a weak swimmer who took minutes to tackle a single length of the pool, excruciatingly slow compared to most of the other kids, who typically finished in 20 seconds or less. But he never missed a practice, unlike the stronger kids his age, counting on their natural prowess to be the chosen ones. At one memorable meet, the one in which my insistence to include him prevailed, he showed up while two of our swimmers didn’t. The relay team of which he was a member scored essential points that edged the pool’s team to a meet win. It was an obscure moment in the history of community swimming but seemed to make an impact on the kid’s self-image.

My boss didn’t congratulate me on my wisdom and the board never showed any appreciation for my efforts, just begrudgingly paid me for the hourly wages that I demanded.

Dread of being dismissed as greedy (a form of gas lighting), simply by asking to be paid for hours worked, warped my thinking — for at least part of my working years. I graduated from college during a recession with 10% unemployment, so asking for more than was offered to me for my first real job wasn’t something I did, nor did anyone else I knew. There were also times in which I felt anxious when approaching certain clients to pay their invoices.

But then, just as I realize that certain roads aren’t as scary as I remember, I acknowledge progress. Not only have I overcome many of my fears but there’s been a wider acknowledgement of the wrongness and prevalence of pay inequality. Today, I remember the negotiation that led to a ten-times increase in an offer as well as clients who eagerly pay on time.

My first reaction to a thorny money issue involving difficult people: find an alternate route, a way of avoiding fear and confrontation. Then I remember I don’t need to do that: I can face the twists, turns, and uncertainties. Meanwhile, the more we can advocate for fair pay and fair treatment regardless of gender, the better for the team.

For much of my adult life, I’ve focused on the aspects of money that are blind to gender. My spreadsheets and investments don’t care whether I’m female or male, look strong or weak, do or do not recognize a good backstroke (just look for the kid who is NOT going in circles), or brake on downhills.

How have you made progress in overcoming fears about money?