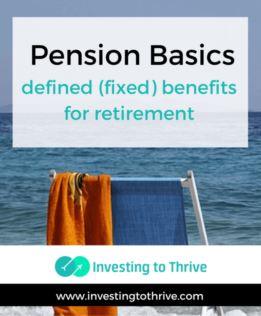 I had a brush with a traditional pension (defined benefit) plan through my first job out of college in the early 1980s. Soon after I was hired, the company disbanded its program in favor of a 401(k) plan. Those of us with minimal amounts credited to our retirement accounts received a cash payout. I was handed a check of less than $200, relieving my employer of all future obligations associated with pension payments.

Over most of the subsequent years, my husband and I grew our retirement balances through defined contribution plans, such as 401(k)s in which the amounts we could contribute were specified, not defined benefit plans in which a future benefit was promised.

My husband took a new position a few years ago with a company that offers excellent benefits. A pension plan, of all things, is among its offerings. Who knew that pensions were still around?

According to Towers Watson (via BloombergBusiness), 22% of Fortune 500 companies offer pensions to new hires. These businesses tend to operate in predictable industries, such as utilities and insurance. Many government agencies and unions also offer pensions.

What I have learned about pensions

Though I have accumulated stocks and bonds in retirement accounts, I am still excited and intrigued about the prospect of a steady monthly income that doesn’t depend directly on my investments. And, while I don’t plan on developing actuarial skills to manage a pension, understanding how this type of retirement program works is of interest to me. Here are a few things I have learned:

Like 401(k) plans, there are basic legal requirements for pension plans.

There are federal and state laws that govern the design, funding, and implementation of pension plans. Employers offering pension plans are to follow guidelines that relate to issues such as summary plan descriptions, vesting schedules, cost-of-living adjustments, employee eligibility, and reporting of funding status.

Though certain standards apply, plan features are likely to differ among private employers, unions, and government agencies. Further, pension plans are updated periodically. And, though payout formulas are not to be adjusted retroactively, changes can be made going forward. So, pension plan guidelines and payouts may vary not only among employers but also among employees at a single employer.

For more information on laws relating to retirement plans, see the U.S. Department of Labor’s page on What You Should Know About Your Retirement Plan.

One of the great things about a pension plan is that we don’t have to manage the investments inside of the pension plan, the way we have to make decisions for our 401(k) and IRAs.

But some involvement may be helpful. For example, it makes sense to name a beneficiary for the pension plan. Plus, it may be helpful to periodically review plan documents and statements, and determine the impact of pension payouts on our overall retirement plan.

When a recipient files for pension benefits, he or she may be able to elect the payout method. Choices may vary based on the pension plan design and may include:

Generally, for married people, the default selection is a qualified joint and survivor annuity (QJSA), which provides benefits to the survivor after the retiree’s death. To make a different choice, the spouse will likely need to waive her or his rights.

At some point, we’ll be able to decide what’s best for us based on factors such as life expectancy, need and desire to provide income to a spouse, retirement account balances, and tax consequences.

We can’t tap pension funds prior to retirement

According to CNNMoney, we can’t borrow from the pension or withdraw funds prior to retirement. This plan design differs from the 401(k) plans that we’ve had, which have allowed loans, and our IRAs, which permit distributions (though there may be tax consequences to taking out money early).

My husband may be able to retire early (before age 65) and collect pension payments. His monthly income could be reduced if he starts receiving benefits earlier rather than later, similar to Social Security retirement benefits.

Average compensation for a specified time period, along with years of service, impacts the value of the pension. Actual benefits will vary between different employers and even among the same employer, depending on the pension contracts in force during a plan recipient’s working life.

My husband’s employer sends out regular updates about retirement plans. But if I had more questions, I’d contact the employee benefits office to get an understanding of the pension formula that applies to our situation.

A special type of pension program is a cash balance plan

Some defined benefit plans indicate promised benefits in terms of a cash balance, instead of a projected monthly payout. This balance can be received as a lump sum or possibly converted into an annuity offering monthly payments upon retirement.

For more information on this type of plan, check out this article on Cash Balance Pension Plans presented by the U.S. Department of Labor, Employee Benefits Security Administration.

The idea of a defined benefit plan is to provide retirees with a specific payout in retirement. To that end, employers or plan sponsors are responsible for setting aside money to fund their pension programs, managing investments, and projecting payouts in a manner that enables the pension provider to deliver benefits as promised.

However, pension guidelines seem to allow leeway in delivering benefits, or rules are not as strictly enforced as a reasonable retiree may expect. For example, Detroit retirees have seen pensions reduced following the city’s bankruptcy. Federal legislation has allowed severely distressed multiemployer (union) pension plans to reduce benefits paid to retirees. And though certain plans are protected by the Pension Benefit Guaranty Corp (PBGC), these safeguards may provide limited protection.

So, it makes sense to understand how a pension is being managed. For starters, I can check how well the plan is being funded by reviewing the provider’s pension funding notice yearly.

What I find intriguing about pensions is the cash flow that they generate. Generally, the purpose of retirement planning is to develop streams of income from rental properties and stock-paying dividends, etc., or build an investment portfolio that can be sold to produce income. Often, retirees need to accumulate significant amounts of wealth in order to produce a monthly income equal to many pensions.

For example, a pension that pays $2,000 per month to an employee who retires at 65 and plans to live for 35 more years is roughly equal to a $400,000 investment account that earns 5%, year after year. Consider comparing this scenario to saving on our own to fund retirement: we’d need to set aside at least $3,350 each year during a 40-year career and earn a steady 5% all of those years to accumulate $400,000.

Still, a traditional pension may be a welcome component to a multi-pronged strategy that supplements other sources of retirement income.