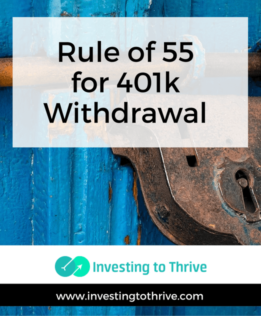 I had never heard of the Rule of 55 until a couple of months ago when a Certified Financial Planner (Jim Blankenship, CFP) mentioned the possibility in a discussion forum I frequent. I’m not an expert on this rule (or any IRS rule) but here’s what I’ve learned about this penalty-free method of taking a 401(k) withdrawal.

Here’s how this conversation got started: a participant posed the question about what to do with a 401(k) account with a soon-to-be former employer when making a job change. I mentioned the three main ways (I knew of) to handle it:

I omitted the possibility of taking a distribution now because that way horrifies me for many reasons including the tax penalty on early 401(k) withdrawals.

What ensued in the discussion forum was a debate about the merits of 401(k)s compared to IRAs. Many insisted that IRAs were always better than 401(k)s because of fees associated with employer-sponsored plans. A few others, like me, defended the 401(k) because of its special features and the general caveat that the right move depends on the particulars of an individual’s unique circumstances.

This argument is similar to the one regarding student loans: you may not want to consolidate, refinance, and thus reclassify federal loans to a private status because you’ll lose special benefits, such as the ability to defer payments while you’re unemployed — even though there’s a possibility that you’ll get a better rate. The idea here is to look at the obvious comparisons (investment fees and interest rates, for example) and consider features that could save money under certain circumstances.

For example, keeping money in 401(k) rather than a traditional IRA may be advantageous taxwise if you happen to do a Roth IRA conversion. Schwab has a calculator to help you see the impact of non-Roth IRAs in the conversion.

For me, the surprise benefit uncovered in the forum discussion was the Rule of 55. In general, this rule allows 401(k) account-holders to begin penalty-free withdrawals at the age of 55 under certain circumstances. Based on my research and understanding, these circumstances include:

Mike Piper, CPA, and author of the Oblivious Investor, explains this rule and references the IRS tax code that mentions this exception to the 10% penalty in a blog post. He also clarifies that you can’t quit at age 50 and expect to get access to your money free of tax penalties at age 55; you’ve got to work for the employer with the 401(k) until you’ve come of age at 55 years old (or turn 55 in the year in which you become separated from your employer).

You can find an explanation from the IRS on this topic here.

Note that you’ll still have to pay regular income taxes on withdrawals. In addition, your state’s department of revenue may have different rules about early withdrawals than the IRS.

Further, I’ll mention that your 401(k) plan administrator may not allow this distribution or may require you to take a lump-sum distribution, resulting in higher-than-expected tax liability than you’d anticipated. So, even though the IRS allows the withdrawal penalty-free doesn’t mean that you’ll automatically gain access to your money in the way you desire. You’ll need to check with the plan administrator and plan documents to be sure.

Another point of mystery is whether you can access funds from multiple 401(k) plans. Piper states that you can access money from any 401(k) plan in which you were displaced from the sponsoring employer at 55 or older while other sources have argued that you’ll only be able to get money from the most recent employer.

This nuance in interpretation leads back to the original discussion. One option for dealing with an old 401(k) is to move money to the new 401(k), from which you may be able to withdraw money when you turn 55.

The main point is that you may have this early distribution option with a 401(k) — or a similar ERISA-qualified, employer-established defined contribution plan such as a 403(b) as Jim explains in his article on this topic — but not with an IRA. So, if you plan to retire early or earlier than 59.5 years, then you might consider keeping money inside the 401(k) plan rather than doing an IRA rollover. To decide on the approach that’s right for you and understand how the rule of 55 might apply to your situation, consider consulting with a CFP and/or tax advisor.