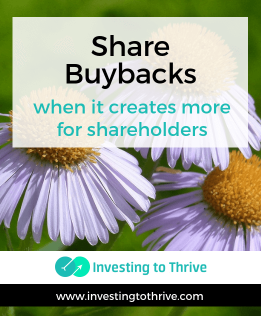 My readings about outstanding shares have led me to consider share buybacks and share dilutions, both controlled by corporations in ways that can affect the value of my holdings but are technically outside of business performance. In the past, I’ve considered share buybacks as the good guy and dilution, bad. But my research has shown me that share buybacks can be both positive and negative, depending on how they’re used. Here’s what I’ve learned:

Share buybacks are corporate actions, the repurchase of outstanding shares by the corporation. Just like you and I can buy the stock at the going rate (market price), corporations can and do the same.

Whether my 2.5% is now worth more is another discussion, but if the company is profitable and money spent buying shares represented the best use of cash, then the buyback is favorable to me as an investor.

In some cases, corporations may approach investors with a tender offer, which is different than buying shares on the open market but is similar in terms of share buybacks. Certain shareholders or private firms that want to take a publicly-held company private or gain a controlling interest in the company may issue special offers. In some cases, if the stock price is unusually below intrinsic value, an offer just above the current price may seem more attractive than it truly is.

To identify companies involved in share buybacks, go to corporate 10k filings with the SEC; for example, Johnson & Johnson announced a shares repurchase program in this report (disclosure: I am long on JNJ). MarketBeat publishes a list of companies that have announced share buyback programs.

Share repurchases are just one of the many uses for extra cash. When a company has money to spend, here are some of its choices:

Ideally, management decides to implement a share buyback program when the best and most efficient use of extra cash (or a certain portion of cash) is this purpose. Acquisition opportunities, for example, may not be attractive in terms of return on investment.

In one of his letters to shareholders republished in Berkshire Hathaway Letters to Shareholders, Warren Buffett says:

One usage of retained earnings we often greet with special enthusiasm when practiced by companies in which we have an investment interest is repurchase of their own shares. The reasoning is simple: if a fine business is selling in the market place for far less than intrinsic value, what more certain or more profitable use of capital can there be than significant enlargement of the interests of all owners at that bargain price? The competitive nature of corporate acquisition activity almost guarantees the payment of a full – frequently more than full price when a company buys the entire ownership of another enterprise.

He also argues that the distribution of dividends is an inefficient method of sharing the wealth, particularly when these dividends are reinvested in the dividend-paying stock. Dividends in regular brokerage accounts trigger taxes, which then reduce the amount of money available to invest. By repurchasing shares, the company increases an investor’s ownership without the complications of reporting dividends and paying taxes on the income.

Buffett suggests that buybacks can be an excellent use of excess cash. But some companies borrow money in order to conduct share repurchases. Corporations may argue that low-interest rates justify this practice. Whatever the reasoning, taking on debt to repurchase shares is different than using extra cash generated from operations.

Earnings per share (EPS) can increase as a result of fewer outstanding shares and not as the result of earnings growth. For example, if earnings are $1 million for a company that formerly had 50,000 outstanding shares but now has 40,000 shares, then EPS grows from $20 to $25. This improvement in EPS occurs independently of underlying business growth.

Similarly, cash spent to buy shares means less cash on the balance sheet and fewer assets. (Assets are comprised of many things, including cash.) Return on assets (ROA), a measure of management efficiency, is higher when assets are lower, all other things equal. So, again, this financial measure improves when buybacks happen.

With stock splits, for example, a lower price (say from $500/share to $250/share as a result of a 2:1 split) may attract more investors who can afford to invest $250 at one time but not $500. Similarly, share buybacks can create conditions that make a stock more attractive. A higher EPS and higher ROA than before may attract certain investors who weren’t interested when EPS and ROA were lower. In addition, greater trading activity from buybacks may build demand and result in higher prices.

At a deeper level, investors who are aware that stock buybacks happen with certain companies (when prices are below the business’s intrinsic value) may be more apt to buy company shares because of this corporate support for a floor of share prices.

There’s a widespread belief that share buybacks are not always in the best interest of shareholders.

SEC Commissioner Robert J. Jackson, Jr. argues that corporate executives have taken advantage of rules governing buybacks. Specifically, executives and insiders may exercise options to purchase stock (generally at lower than market prices) and then sell soon after buybacks occur. In this way, they are cashing out for short-term gain, rather than tying their fortunes to the long-term success of the corporation.

Here are additional reasons why share repurchases may not be in the best interest of shareholders:

To a certain extent, share repurchases manipulate prices. But it seems unfair that a company should be disdained because it snaps up bargains with its extra cash — when there are no better alternatives. However, corporate actions should be in the best interest of the shareholders and shouldn’t enrich executives at shareholders’ expense.

From now on, I’ll look at how corporations conduct their share buybacks. I’ll strive to notice whether they finance these buybacks with debt or use cash, whether they buy when prices are low, and whether insider trading (selling not buying) flourishes after buybacks happen.

Have you found share buybacks to be in your best interest as an investor?

One response to “Share Buybacks, What to Know to Protect Yourself”